California Health Insurance – Rate Increases & Changes Ahead. Hold on to your knickers! 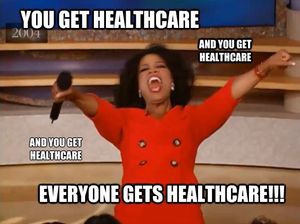 Covered California on Friday released the estimated 2020 rate changes for health insurance in each of its 19 pricing regions, and residents of the four-county Sacramento region will see average increases of 1.8 percent on the individual marketplace.

That means premiums will actually drop slightly for some local consumers. Covered California’s release noted that, if consumers chose the lowest-price plan in their same metal tier, they could cut their rates by 2.2 percent. The average statewide premium increase is 0.8 percent.

“These regional rates confirm once again that health care is local and personal. It also affirms that the overall story is a good one for consumers across California,” said Covered California Executive Director Peter V. Lee.  “Even before considering the positive impact of new state subsidies, many Californians will be seeing little change or even decreases in their underlying premiums.”

The Sacramento-area rate change compares favorably to San Francisco County, where rates will jump by 6.6 percent on average. Even San Franciscans can cut their rates if they shop around, though, by as much as 3.7 percent, according to the 2020 rate booklet. While the rate change in El Dorado, Placer, Sacramento and Yolo counties looks low in comparison to San Francisco, it is higher than in 11 other pricing regions in the state.

Rates will decline, on average, for residents of four pricing regions — the 22 Northern Counties; the San Joaquin, Stanislaus, Merced, Mariposa and Tulare region; the Mono, Inyo and Imperial region; and the Kern County region — even if they maintain the same plans.

In three pricing areas — southwest Los Angeles County; the Inland Empire; and San Diego County — premiums will average about the same as they did last year.

Consumer advocate Anthony Wright said, if state residents shop and switch plans, they could see their premiums decrease by an average of 9 percent. In some places such as Orange County, he said, switching could lower premiums by as much as 16.5 percent

Some shoppers, Wright said, might also take advantage of the opportunity to select a silver-tier health plan with lower deductibles rather than keep the higher-deductible bronze plan they chose last year to save money. Health insurance sold through Covered California and on the individual market are sold in four levels of coverage: bronze, silver, gold and platinum. As the metal category increases in value, the size of co-pays and deductibles declines.

“In our high-cost-of-living state, at least a third of Californians were choosing ‘bronze’ high-deductible plans with little coverage in order to afford premiums,” said Wright, executive director of Health Access California.  “Thanks to the investments in this year’s state budget and other state actions to safeguard us from the Trump Administration’s sabotage of our state’s health care system, those consumers will get more financial support than ever before.”

Earlier this year, the California Legislature and Gov. Gavin Newsom have put in place new state subsidies that will help an estimated 922,000 residents pay for their health insurance and established a so-called individual mandate that will impose a state tax penalty on any California resident who does not maintain health insurance coverage.

The California subsidies will benefit roughly 235,000 state residents who do not qualify for premium assistance from the federal government because their income exceeds limits and 663,000 Californians who currently receive federal subsidies and will now also get a state one.

For instance, Covered California noted that a 62-year-old Oakland couple who earn $72,000 a year would not qualify for any federal help but could receive $1,700 per month in help under the state subsidy program. That would cover 70 percent of their monthly premium, the agency said.

“This first-in-the-nation program will make coverage more affordable for many middle-income Californians, such as small-businesses owners, entrepreneurs, contractors or workers in the gig economy,” Lee stated in the news release. “Every consumer is different, and even without the new state subsidies in place yet, many will see their premiums go down in 2020.”

Kaiser Permanente executive Bill Wehrle said he applauded the actions of the governor and the Legislature to support expanded access to high-quality, affordable care and ensure coverage for as many Californians as possible.

Covered California estimates that the legislative changes will get an estimated 229,000 people to buy health insurance. The Golden State’s individual health marketplace now numbers roughly 2.2 million people, according to Covered California, and 1.39 million of those individuals buy their policies through the Sacramento-based health exchange.

The changes in law also spurred three insurers to expand the areas they cover. Anthem Blue Cross, for instance, shrank its geographic footprint to Northern California, Santa Clara County and portions of the Central Valley after the Republican-controlled Congress eliminated the individual mandate. Now the insurer is expanding its presence to the Central Coast, Los Angeles County, the Inland Empire and more of the Central Valley.

Many Sacramento-area residents will be able to choose from as many as four insurance carriers — Blue Shield, Health Net, Kaiser Permanente and Western Health Advantage — but some will have only one option.

Blue Shield is offering both health maintenance organization and preferred provider organization plans. Local consumers in its HMO will see rate increases ranging from 1.7 percent to 7.6 percent, while its PPO customers will see rate hikes of 3.5 percent to 8.6 percent. On average, Blue Shield said it expected a 1.9 percent increase in rates for its HMO members and 5.4 percent for PPO members.

Health Net PPO said its rates will increase by 4.5 percent. Kaiser said its members could see rate cuts as high as 5.4 percent and rate increases of 6.8 percent, but on average, its premiums would go up by 0.9 percent. Consumers in the Western Health HMO could see their rates drop by as much as 3.8 percent or increase by as much as 9 percent. On average, it estimated a 4 percent rate increase.